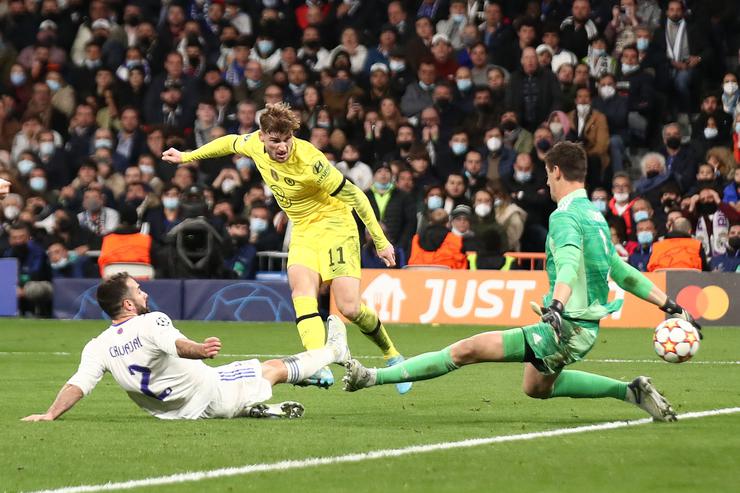 Chelsea started the fight very well and gained a great advantage against their rival Real Madrid. Despite the disadvantage in the first match, Chelsea turned down the game and managed to carry the match into overtime.

⏱ 23′ Real Madrid came very close to the goal. Karim Benzema shot from outside the penalty area and the ball hit the defense and the ball narrowly went into the corner.

⏱ 34′ Chelsea looked for an area by constantly passing to puncture Real Madrid’s defensive distribution. After this pass, Rudiger used the last resort by shooting. The German defender took a hard shot from about 40 meters, but the ball went aloft from the side.

⚽ GOAL | 51′ Chelsea made the situation 2-0 with a goal from Rüdiger. In the corner kick used by Mason Mount from the right corner, the German football player rose to the penalty area and hit the ball with his head and sent the ball from the corner to the net.

⏱ 54′ Benzema, who was sent to the back area of ​​the penalty area from the right wing, controlled the ball with his chest and shot, but the defense intervened at the last moment and prevented the danger.

⏱ 56′ Real Madrid came very close to the goal with Toni Kroos. Kroos’s shot was taken from the corner by Mendy at the last moment.

⏱ 58′ The match became lively after 2-0. This time, Chelsea was the dangerous side. Mason Mount took the ball in the midfield and proceeded with the ball towards the Madrid penalty area. He sent his pass to Havertz, who entered the penalty area from the left. The German football player took the ball in front of him, corrected it, then shot his shot, but it was left in the leather round side nets.

⏱ 62′ Real Madrid once again came very close to the goal. Carvajal sent his pass out of the penalty area from the right corner. Federico Valvarde shot for his arrival and the ball went narrowly over the top.

❌ 62′ Chelsea made the situation 3-0 with Marcos Alonso, but the goal was disallowed after VAR review. In Real Madrid’s defense, Mendy lost the ball on the way out. Kante got the ball in Chelsea, who came from the crowd. French footballer sent a pass to Marcos Alonso, who was thrusting from the left wing. The Spanish football player took his shot, Carvajal blocked it, the star football player hit the ball in front of him again with a shocking style, and the ball met the nets from the 90’s. In the VAR review after the goal, the goal was disallowed because the ball hit Alonso’s hand.

⏱ 66′ Real Madrid came very close to the goal with Benzema. From the left flank, Mendy sent the middle. In the penalty area, Karim Benzema rose through the defense and made a head shot, the ball hit the crossbar and went out.

⚽ GOAL | 75′ Chelsea made it 3-0 with Timo Werner. Mateo Kovacic sent a pass to Timo Werner, who was running behind the defense. The German football player snatched Casemiro after controlling the ball, dribbled Carvajal and shot his shot, the ball hitting the goalkeeper Courtois met with the nets.

⚽ GOAL | 80′ Real Madrid made it 3-1 with Rodrygo’s goal. From the left, Modric sent a great cross with the outside of his foot towards the back post. Rodrygo shot on his arrival and made the score 3-1.

After the meeting, we will give you all the details here. Please continue to follow us.

When is Formula 1 Australian GP? At what time? How to watch it?

What is DRS in Formula 1? What does it do? When does DRS gets activated?